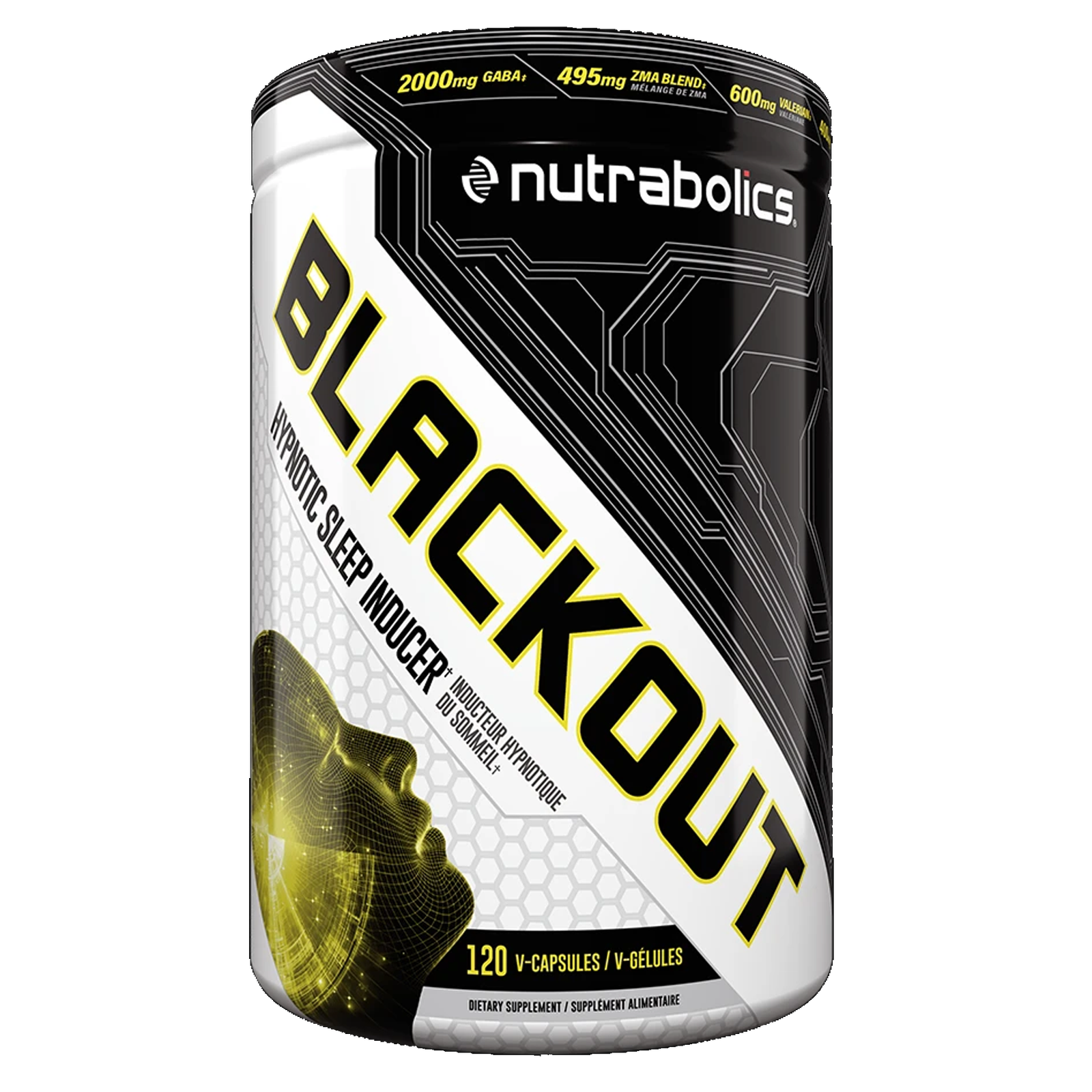 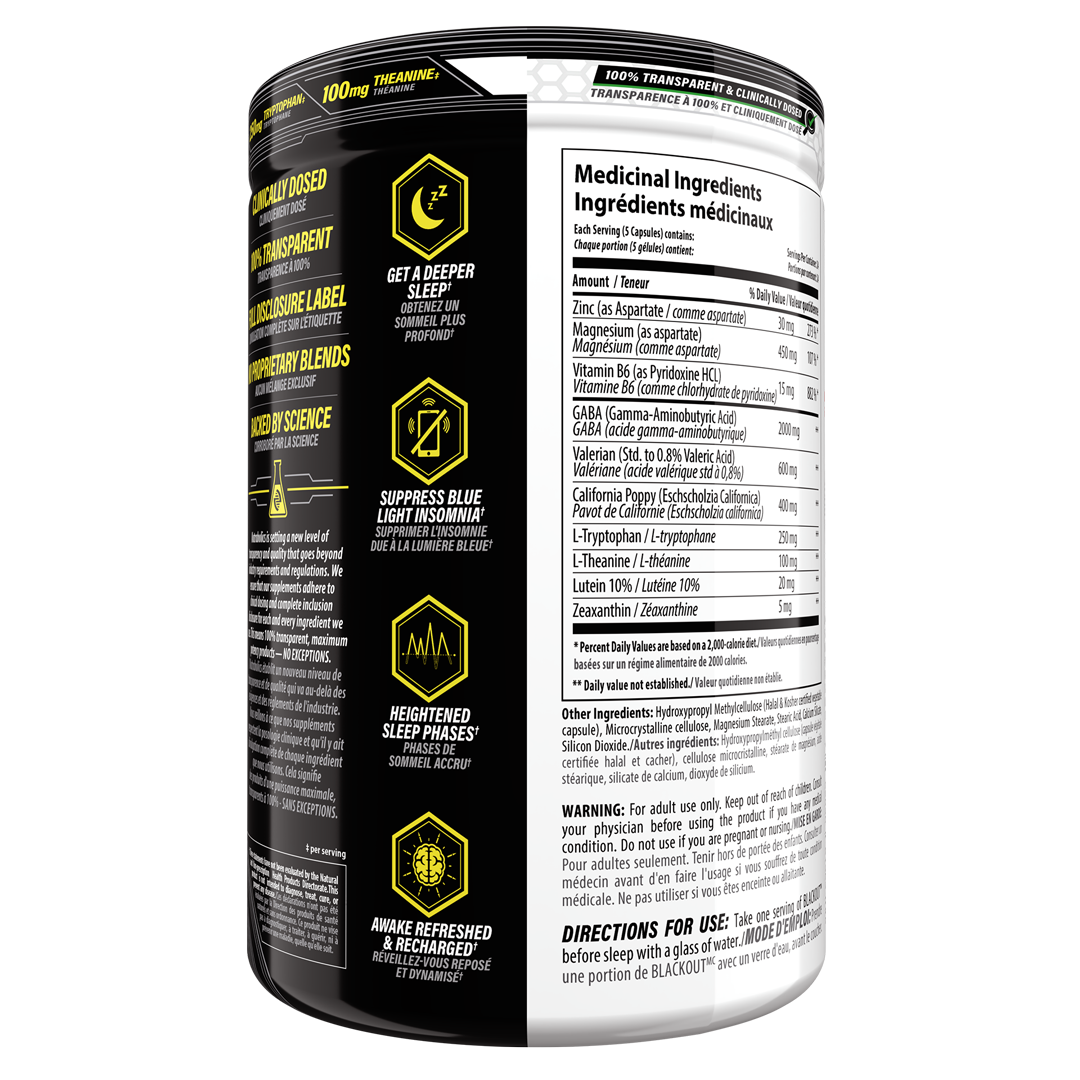 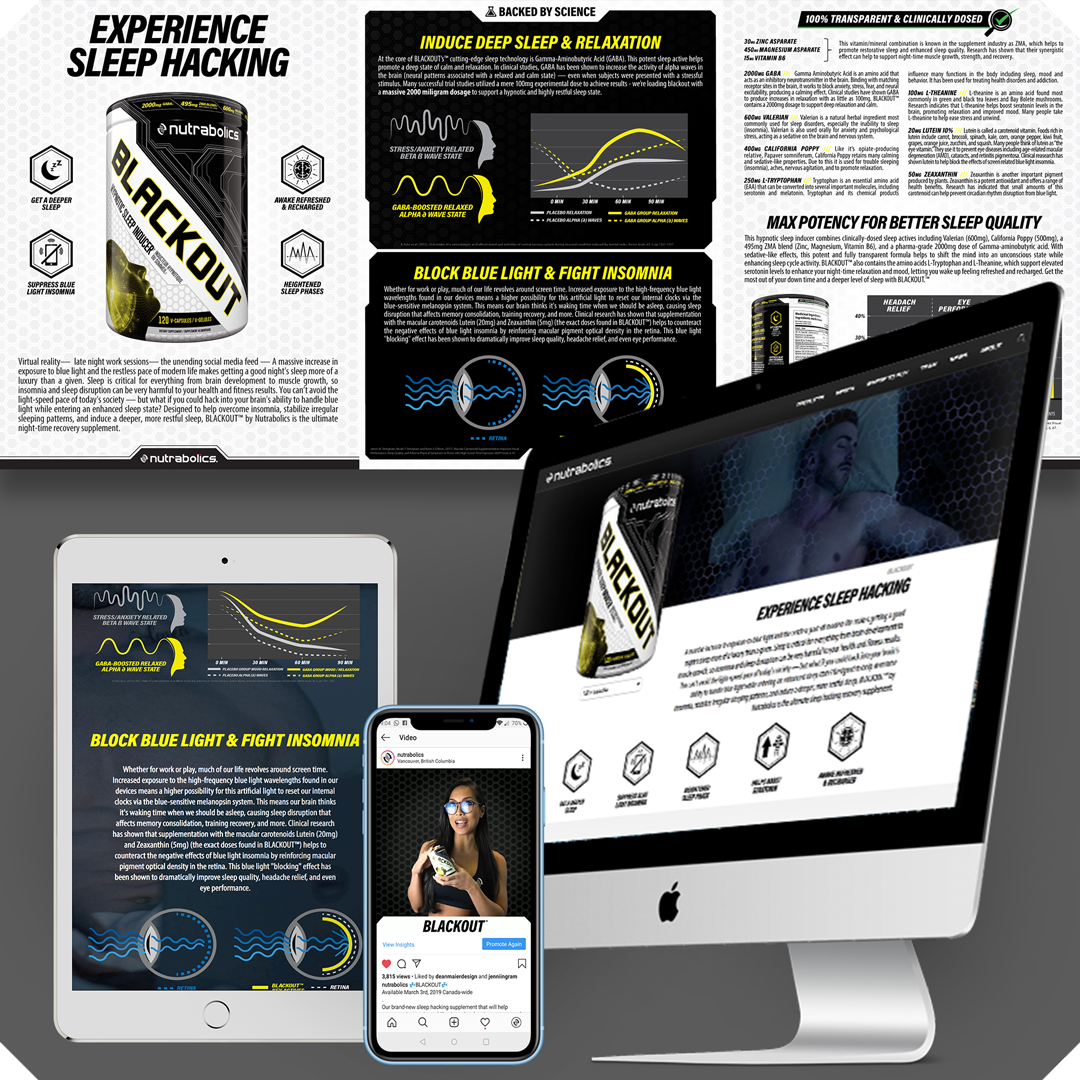 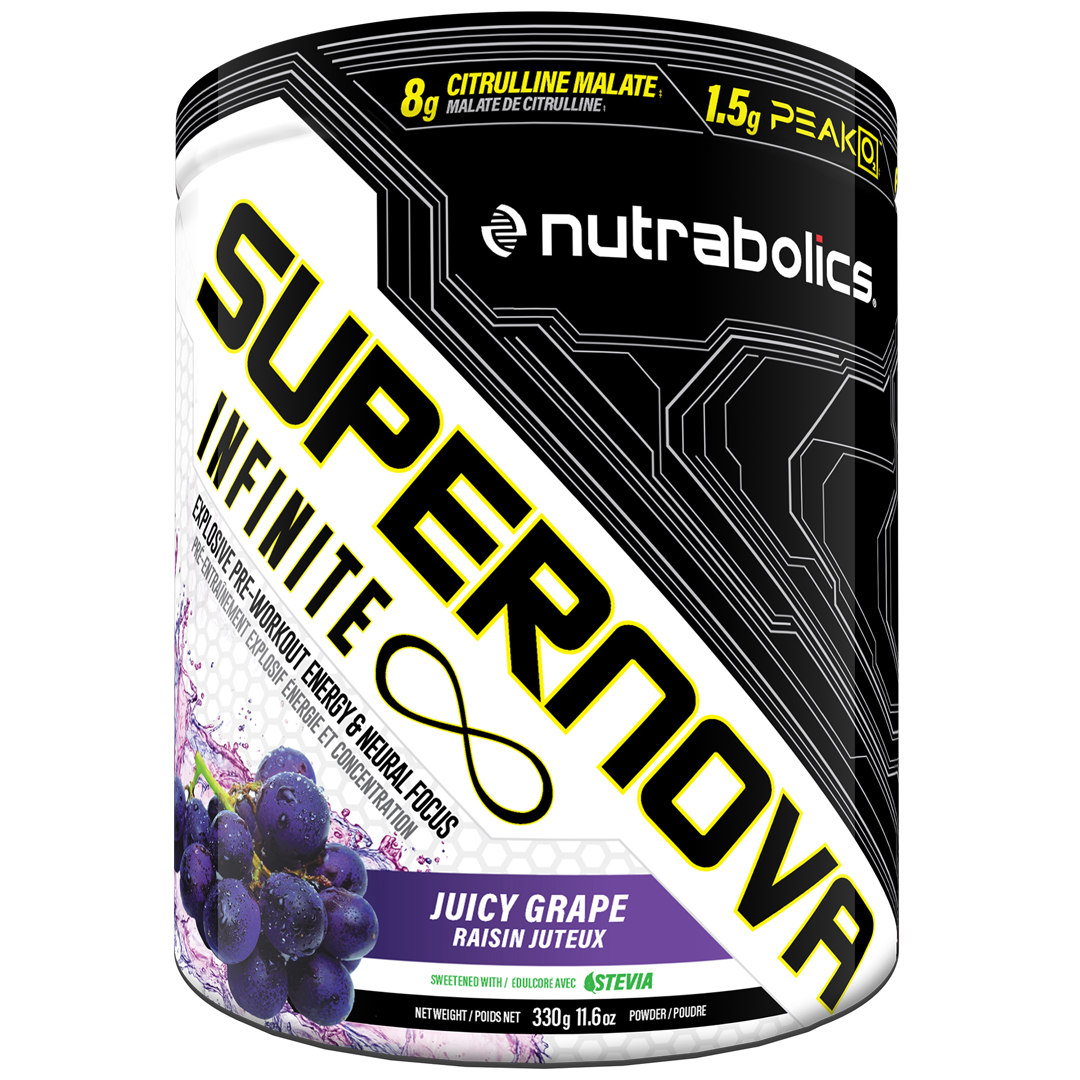 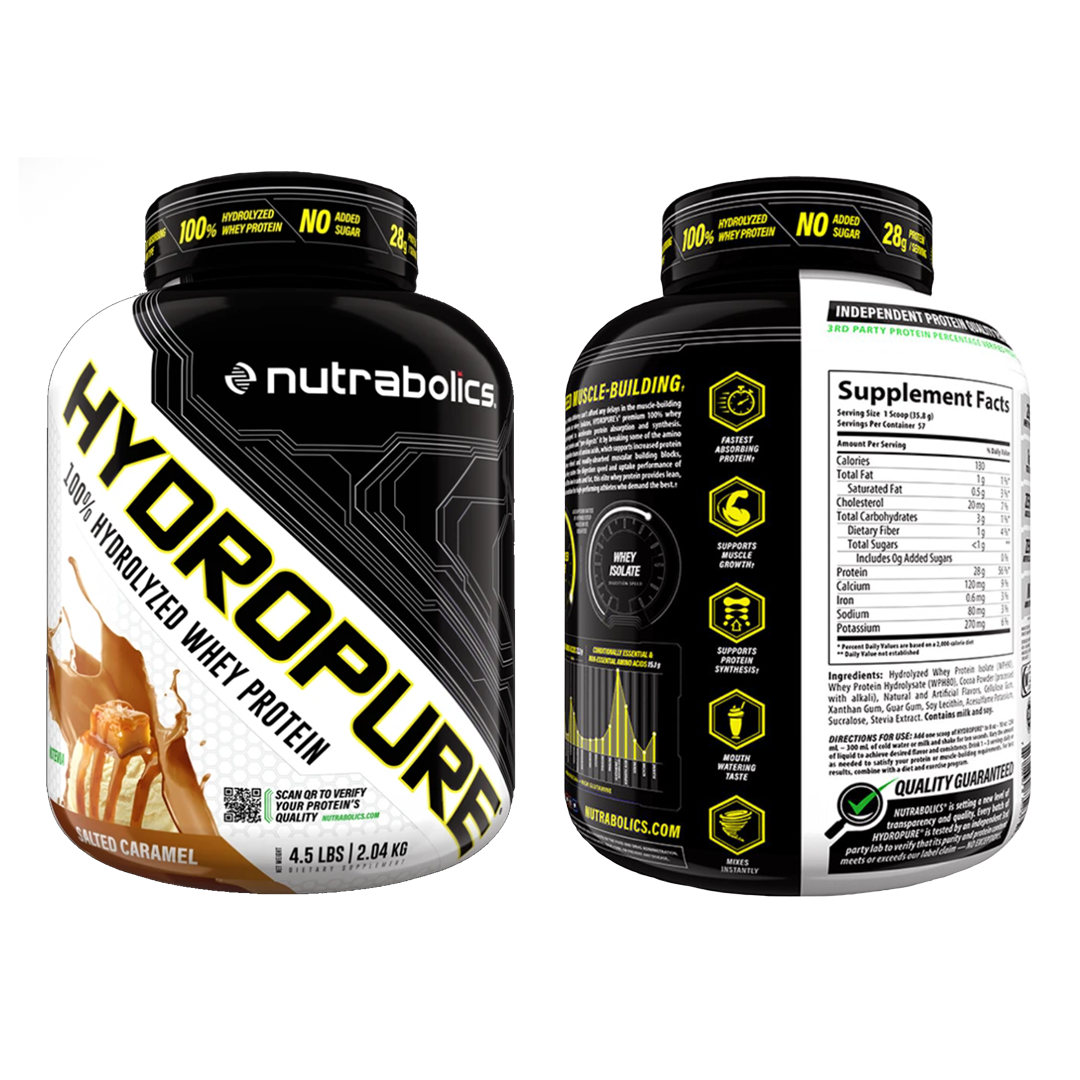 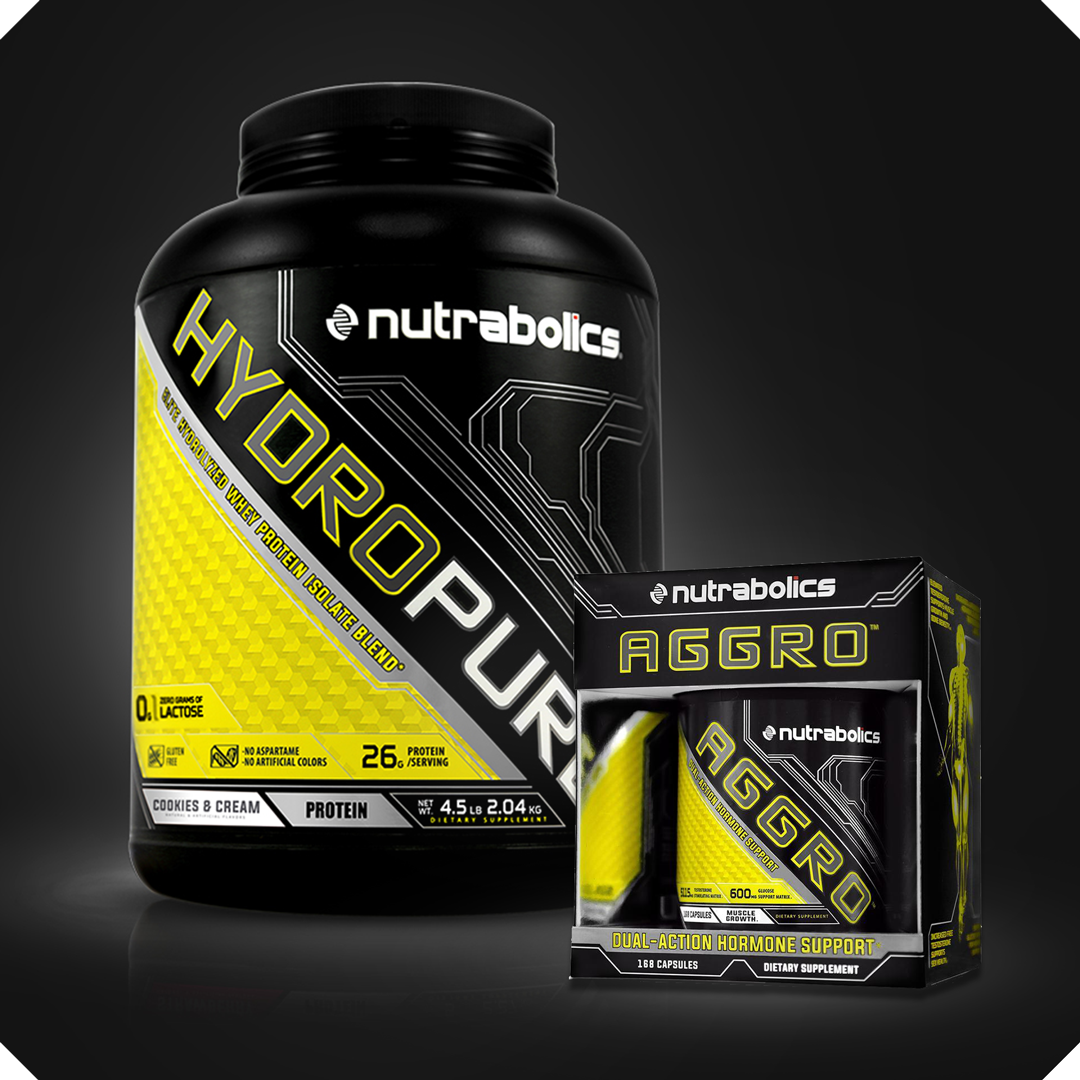 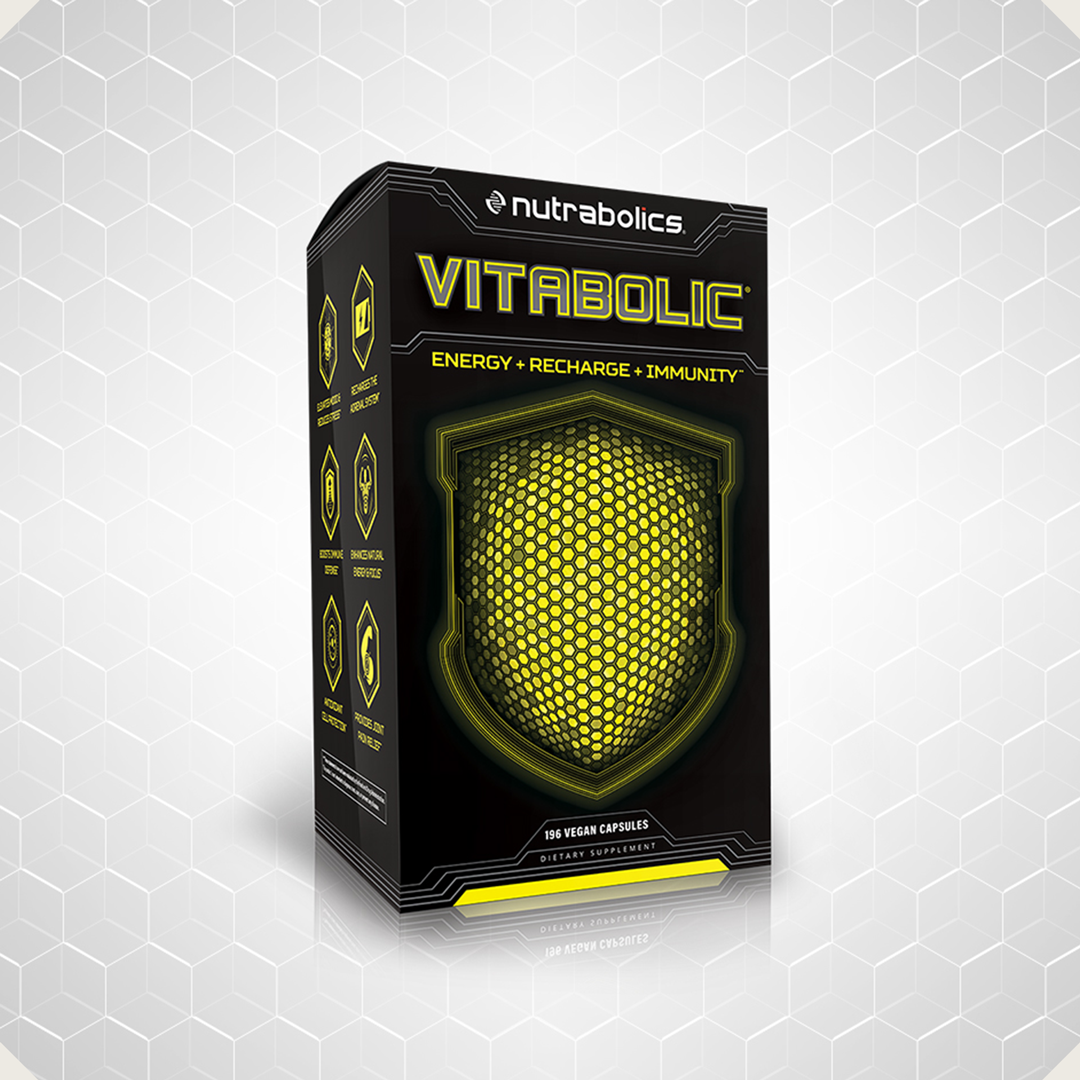 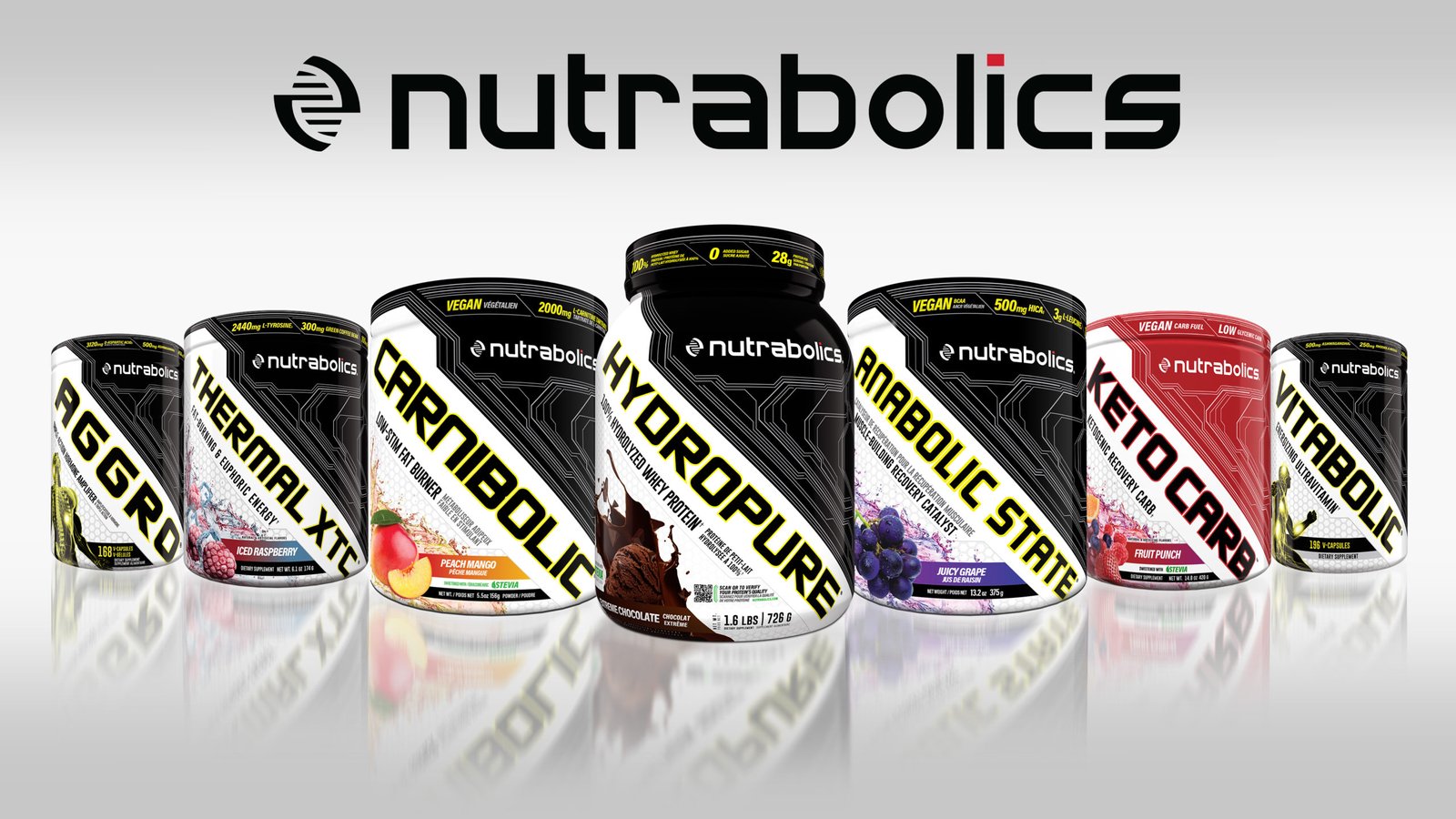 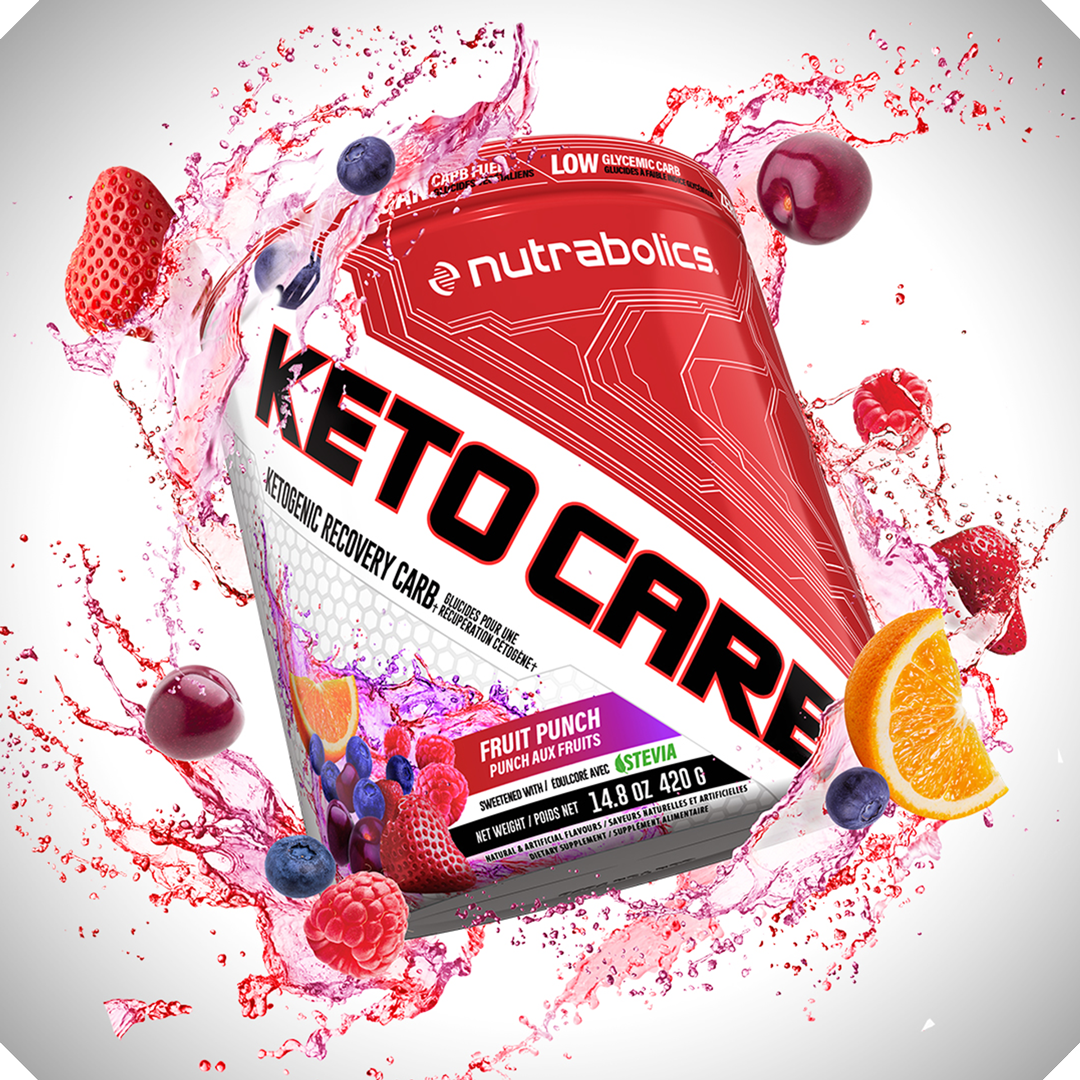 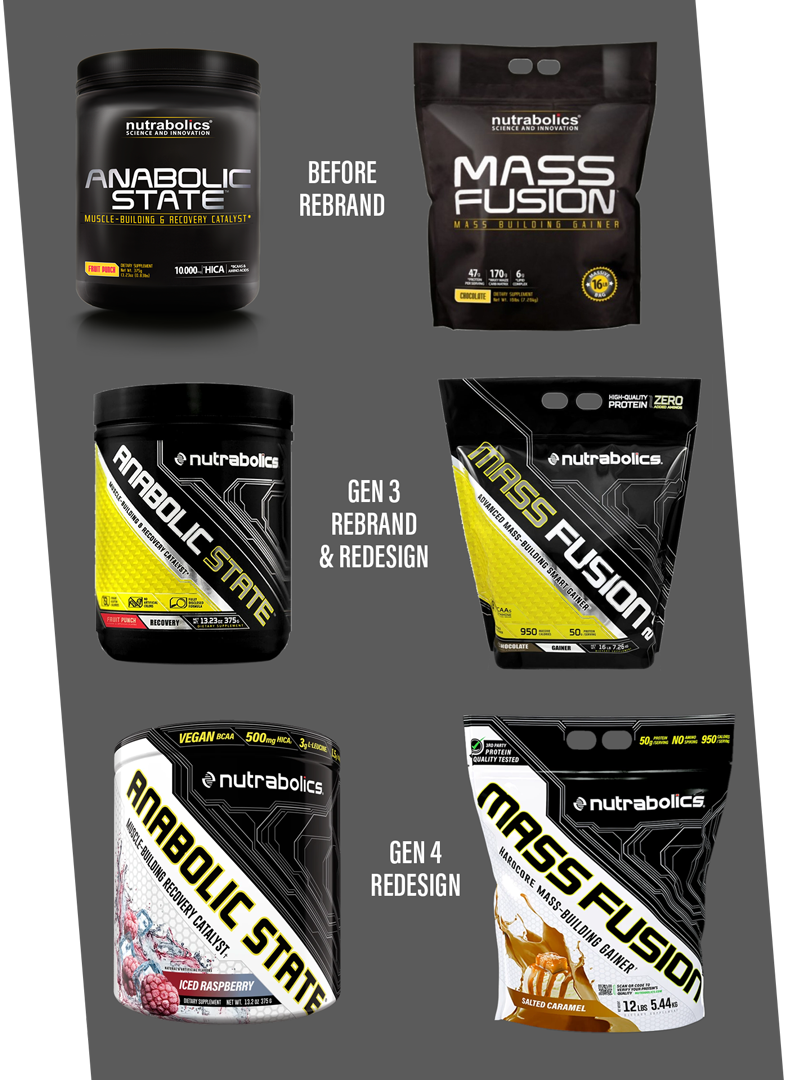 Dean rebranded the global supplement line Nutrabolics in 2013, and redesigned it again in 2018.

Long coasting on a set of matte black labels that were unique for their time but rapidly becoming antiquated, Nutrabolics products were getting lost on store shelves amidst a growing number of products using brighter colours and bold graphic design. Their logo was over complicated with arbitrary line elements and a “science and innovation” tagline that needed to be felt by consumers instead of forced upon them.

Merging the two central brand values with a growing cultural trend towards futurism, Dean pulled inspiration from the sharp angles and hexagonal form language of high technology. The dramatic new packaging emphasized a more prominent, cooler yellow which occupied half of the PDP and sported a custom “carbon-fibre” hex pattern. Based on market research, product names were shifted to a 45 degree angle to help differentiate the line against its competitive set where the standard was horizontal and vertically oriented type elements. A thicker typeface was selected to allow for more visual impact while preserving some legacy foil accents. Carefully nested callouts announced product benefits without disrupting the flow. Lastly, based on hours of vendor qualification, great care was taken to create and source raised varnish die forms to apply a textured surface to the label. Made to match the contour of the circuitry, hex pattern, and product names, the robust varnish added shelf appeal by refracting light and making the products feel fantastic to touch, as if you were running your hand over a new Apple gadget or carbon fibre machine component.

Dean transformed the Nutrabolics logo with an edgy sans serif font and all-new DNA-inspired “tech helix” icon. This biotech inspired ID was created as an understated means of conveying the brand’s values and presenting a richer identity. A subtle nod to the Nutrabolics legacy was preserved in it’s red dot and lowercase typeface, but overall the new wordmark/icon combo brings a more modern, cohesive and self-defining form to represent and re-assert the brand’s science-heavy approach and focus on innovation. Nutrabolics has become synonymous with high-tech supplements.

Years later, seeking to develop a medium to realize the full visual potential of this futuristic aesthetic, Dean sourced a shrink film manufacturer to bring a seamless, ultra-premium feel to the hardcore packaging. Leading up to these 4th gen labels, transparency became the biggest buzzword of the industry. As Nutrabolics had been an early adopter of fully disclosed formulas with high-dose ingredients, Dean recognized the need to further highlight the brand as a leader in consumer-awareness and transparency. Key ingredient callouts and dosages – which are critical at point of sale – were moved to the top of “T-perf” shrink sleeves or onto tamper-evident bands for the larger bottles to emphasize transparency. This helped free up the parts of the label that would survive after the product opening and which were more important for long-term brand affinity.

Several other tactical changes were made using the advantages of the shrink film. The back panels of products were fortified with infographics and clinical research on ingredient efficacy, the signature circuitry elements were augmented and refined, product names were made even bolder with foil elements removed to improve label distance read while preserving the legacy yellow, the hexagon pattern in the PDP was rebooted, and white was made the dominant tone. This shift to a brighter feel was aimed to be more appealing to “softcore” demographics with a new emphasis on flavour. Dean designed and directed the buildout of 25 custom composite flavour & category SKU images, thoughtfully designed to leverage the seamless shrink medium and angular forms while adding appetite and functional appeal. The design was rolled out onto hand-picked ergonomic wide-mouth bottles and other unique package formats including sachets and XL stand-up pouches. Dean also implemented a colour identifier system to differentiate ketogenic (red) and commodity (yellow) sub-lines from the main line while creating added visual variety to the brand’s presentation.

The futuristic elements at the core of this rebrand were rolled out across multiple formats from sellsheets and national ad publications to 20-foot tall expo displays. High technology styles were also infused into meticulously scripted, VFX-rich product videos to ensure that at any touchpoint, consumers would feel cutting-edge science and innovation (see videos in the gallery). The branding, packaging, and marketing was exceptionally well-received by retailers and consumers alike. Years later, the “bio hacking” trend emerged and dozens of niche brands continue to pop up with similar bio-tech style elements. Nutrabolics’ new look can currently be found in 40 countries around the world. 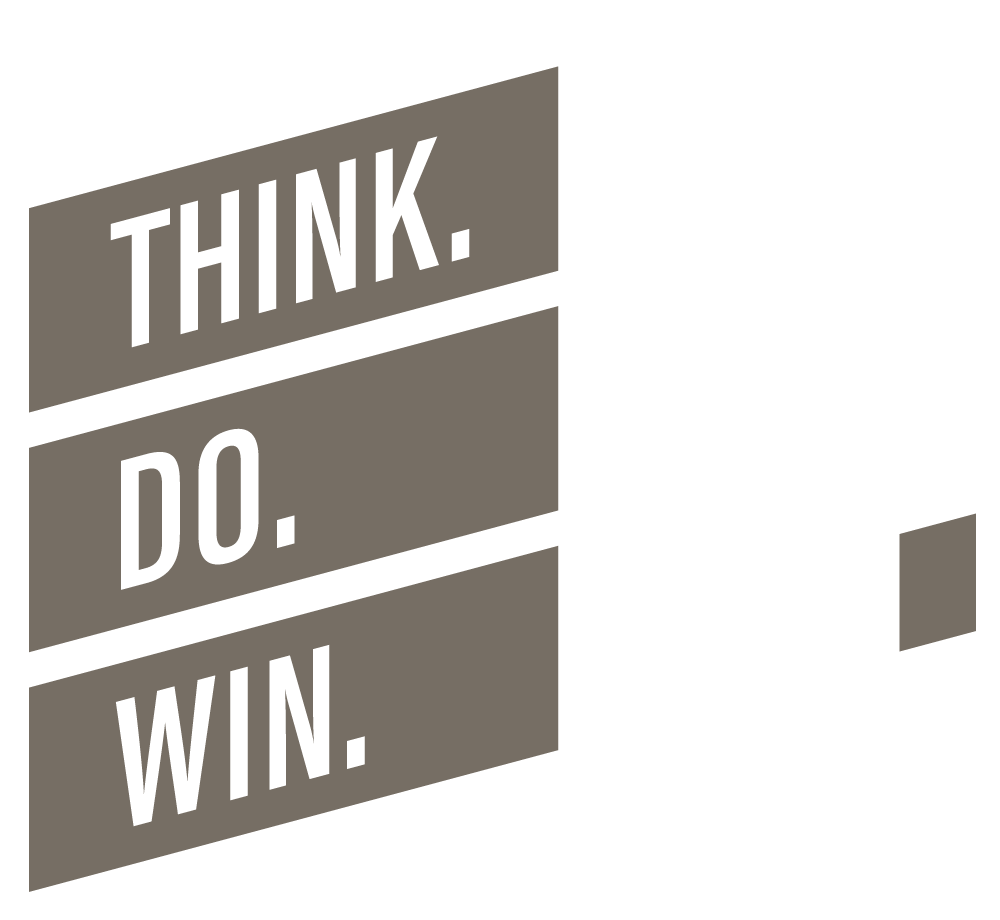